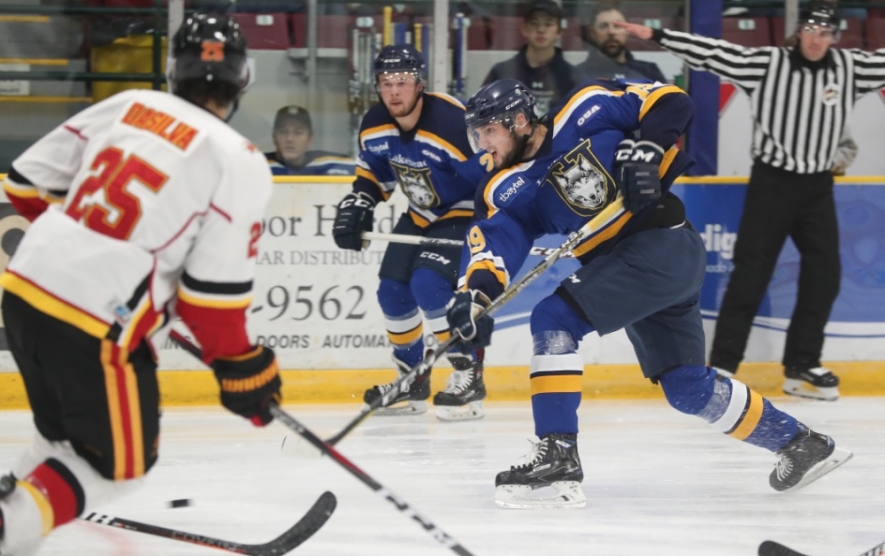 The Lakehead Thunderwolves remain undefeated in 2020 as they battled to a 7-6 shootout victory over the Guelph Gryphons on January 3 in Guelph, ON.

Guelph forward Ryan Valentini took advantage of the Thunderwolves penalty to get the Gryphons on the board halfway through the first period.

With less than five minutes left in the first, junior forward Daniel Del Paggio scored his first goal of the game on a Thunderwolves power play.

The Thunderwolves only got to enjoy their two-goal lead for a couple of minutes before Gryphons’ Bobby Dow and Connor Bramwell scored a quick goal each, leaving the score tied 3-3 at the end of the first.

“It was a game of momentum swings ups and downs, more than usual,” said head coach Andrew Wilkins.

The third period saw the two teams continue to exchange goals. Sophomore forward Tomas Soustal scored the Thunderwolves' second power-play goal of the night assisted by Del Paggio and Auger. All three players finished the game with three points each.

The Gryphons scored the next two goals. The first was scored by forward Mikkel Aagaard, while forward Giordano Finoro scored on the power play to give the Gryphons their first lead of the game.

Thunderwolves goaltender remained solid in net, stopping all seven shots in overtime, while Gryphons goaltender Andrew Masters kept all four shots on his net from crossing the line.

Both netminders would deny the first four shooters sent out to face them, Tomas Soustal and Daniel Del Paggio for the Thunderwolves and Mikkel Aagaard and Todd Winder for the Gryphons, while the third shooters, Lakehead’s Josh Laframboise and Guelph’s Ryan Valentini beat the goaltenders.

In order to stay and the game, Guelph needed another goal, but after already facing 33 shots, Thunderwolves' goaltender Nic Renyard denied them, ending the game and guaranteeing the Thunderwolves two points.

“I thought our guys handled the situations well,” said Wilkins.

“Good result for our group after the break.”

The Thunderwolves and Gryphons will face off for the second game of the weekend, Saturday, January 4 at 7:30 pm.