Lakehead doubles up on Guelph 4-2 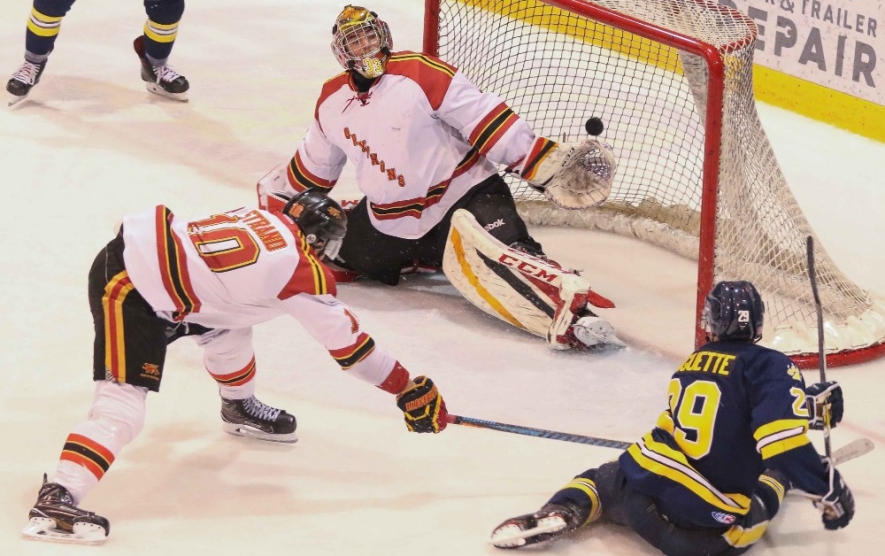 The Lakehead Thunderwolves doubled up on the Guelph Gryphons 4-2 before a crowd of 1,916 at the Fort William Gardens on Friday night, with all of the goals except one coming in the third period.

Sam Schutt opened the scoring on a Lakehead power play when he slammed the puck past Guelph goalie Jason Da Silva just 3:16 into the game, with Matt Alexander and Billy Jenkins assisting.

Wolves’ goalie Devin Green made a huge pad save while the Gryphons held the man-advantage late in the second period to keep Lakehead up by one heading into the third.

Guelph tied the game 54 seconds in the final frame after a giveaway by Daniel Del Paggio allowed Nick Boyer to break in alone on Green and score with a backhand deke.

Del Paggio atoned for that miscue three minutes later when he sped down the right wing and beat Da Silva high on the short side, with Joseph Leonidas getting the helper.

Jake Ringuette put the Wolves ahead 3-1 at the 7:31 mark with a one-timer off a nice pass from Brennen Dubchak on a Lakehead power play, with Scott Gall picking up the second assist.

Seth Swenson replied for the Gryphons two minutes later when he walked in on Green and fired a hard wrist shot past him on the blocker side.

Lakehead’s Patrick Murphy fed a streaking Dubchak who blasted a slap shot from the top of the face-off circle between Da Silva’s pads to round out the scoring at 16:54, once again on a Thunderwolves’ power play.

In a game which featured plenty of penalties, Lakehead finished 3-for-7 on the power play, while Guelph was 0-for-7.

Total shots on goal in the contest were 35-27 for the Thunderwolves.

Lakehead will remain at home to take on the Winsor Lancers at the Fort William Gardens next weekend.