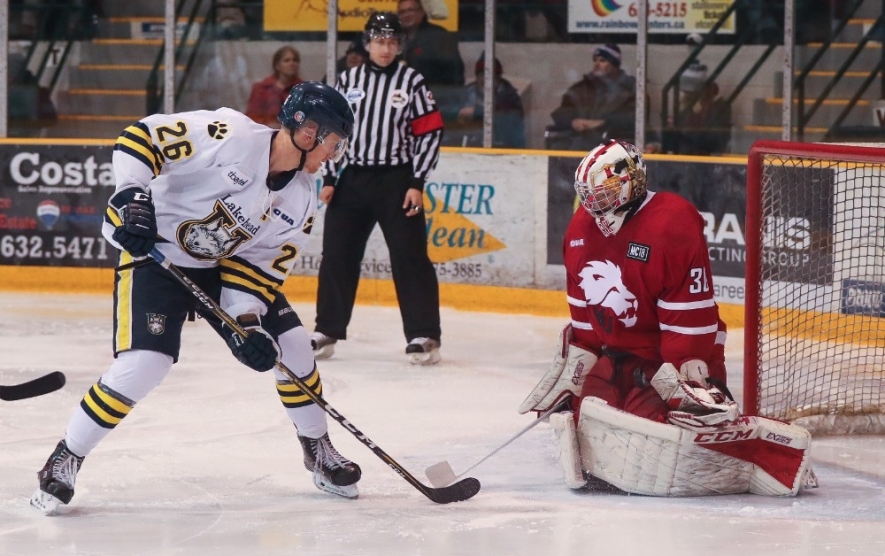 The Lakehead Thunderwolves finished the weekend with a sweep, defeating the York Lions 3-2 Saturday night in Toronto, ON.

After a scoreless first period, the Thunderwolves opened up the scoring in the second period of Saturday night's game, taking advantage of a power-play opportunity as senior forward Jordan Larson deflected the puck into the back of the Lions net, assisted by defenceman Kyler Auger and forward Josh Laframboise.

Lions forward Morgan Messenger didn’t hesitate to respond, tying the game just over a minute later. Messenger then took advantage of a 2-on-1 rush, scoring York's second goal of the game and giving the Lions the lead after 40 minutes.

The Thunderwolves went to work in the third period, killing off a 5-3 penalty and then taking advantage of a 5-3 power play, as Laframboise tied the game seconds after the penalties ran out.

Lakehead’s top line each picked up a point on the Thunderwolves game-winning goal, as Tomas Soustal found Jordan King wide open in front of the Lions net and King secured the sweep for the Thunderwolves.

Junior Daniel Del Paggio picked up the second assist on that goal, keeping himself at the top of the Thunderwolves scoring with 28 points, while Soustal sits in second place with 27 points.

“It was good for our group to come from behind in the third to win,” said head coach Andrew Wilkins.

“A lot of momentum swings over the weekend, we handled ourselves well. Four points is a good result.”

The Thunderwolves will be back at home next weekend to host the Western Mustangs in back-to-back games at the Fort William Gardens on January 17th and 18th.