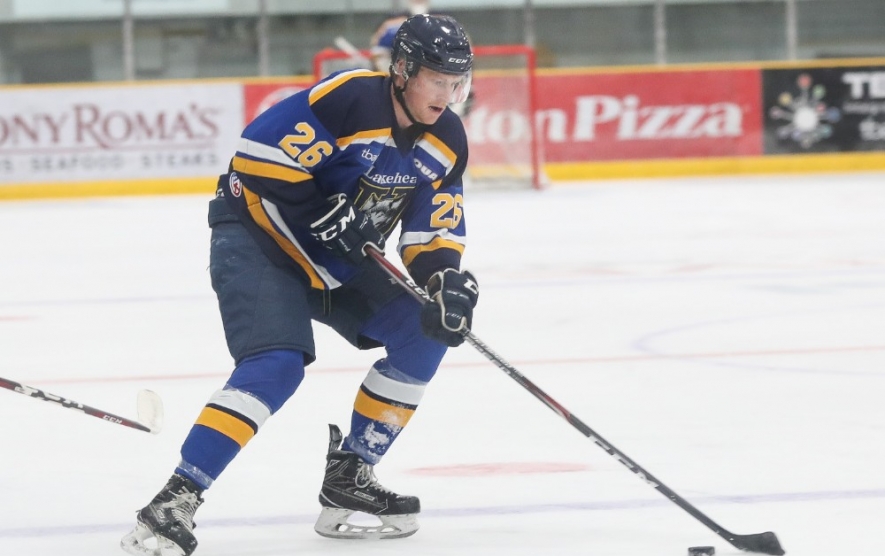 Following a lackluster performance in the OUA opener against the Waterloo Warriors the night before, the Lakehead Thunderwolves responded nicely by edging the Laurier Golden Hawks 3-2 at the Waterloo Memorial Recreation Complex in Kitchener-Waterloo on Friday night.

After Laurier’s Steven MacLean opened the scoring by beating Wolves’ goalie Nic Renyard just 4:25 into the game, Lakehead evened the score when Jordan Larson redirected a great pass from Taylor Egan behind Hawks’ netminder Tyler Fassl at 7:16, with Kyle Auger getting the second assist.

Daniel Del Paggio put the Thunderwolves ahead 2-1 at 14:06 of the first on a goal assisted by Greg Smith and Joseph Leonidas.

Although Lakehead dominated the play in the opening period, Laurier regrouped and knotted the game at 2-2 after Ethan Wiseman fired the puck past Renyard at 6:54 of the second.

For the remainder of the middle frame, the Wolves had a hard time generating much offense but played solid defensively.

Scott Gall got the winner with a great wrist shot from a sharp angle that sailed high and over the shoulder of Fassl with 6:57 to go in the third, with Jordan King getting the helper.

Renyard was tested on several occasions in the final stanza, but stood tall in the Lakehead net when called upon and the Wolves held on to take the victory.

Total shots on goal in the game were 27-21 in favor of the Thunderwolves.

Neither team was able to score on the power play as Lakehead went 0-for-4, while Laurier was 0-for-2.

Lakehead’s win snapped a six-game losing skid to the Golden Hawks dating back to November of 2016.

The Wolves will look to add another one in the win column when they face off against the Hawks again tomorrow night to finish off a three-game road trip.