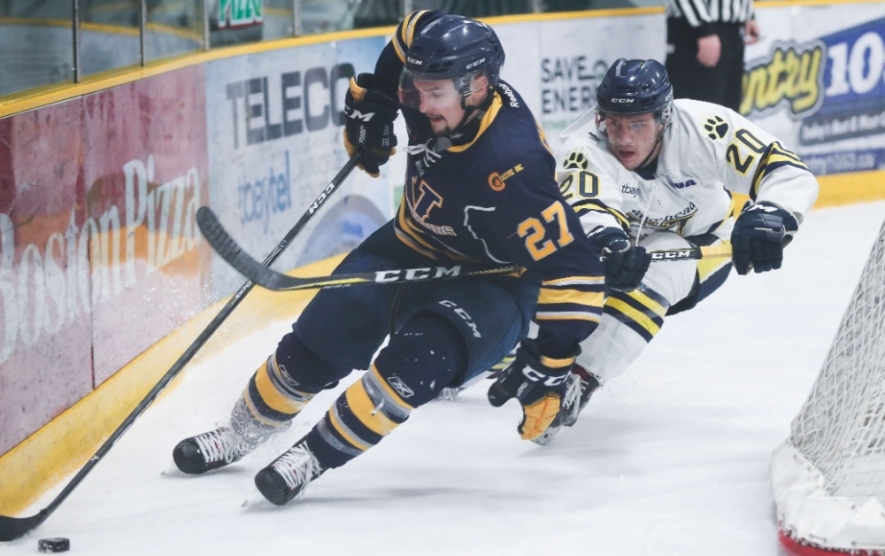 The Lakehead Thunderwolves defeated the Laurentian Voyageurs 4-3 in overtime on Saturday, Oct. 12 in Sudbury, ON.

Two minutes later after the first Laurentian goal, Thunderwolves forward Josh Laframboise answered with his first goal of the night.

Laurentian forward Gabriel Paquin took back the lead 21 seconds after that and the Voyageurs would finish the first period ahead 2-1.

Laframboise scored his second goal of the night late in the second period assisted by Troy Williams and Geoff Dempster.

Less than a minute later the Voyageurs scored and took the lead once again.

Thunderwolves forward Jordan King took full advantage of the power play in the third period and tied the game with a goal assisted by Scott Gall and Daniel Del Paggio, a goal that would send the game into overtime.

Three minutes into 3-on-3 overtime Thunderwolves defenseman Joseph Leonidas buried a rebound to end the game and capture the win for Lakehead.

After two back-to-back weekends on the road, the Thunderwolves will be back in Thunder Bay next Friday, Oct. 18 and Saturday, Oct. 19 to host the Windsor Lancers.