Thunderwolves defeat the Stingers at home 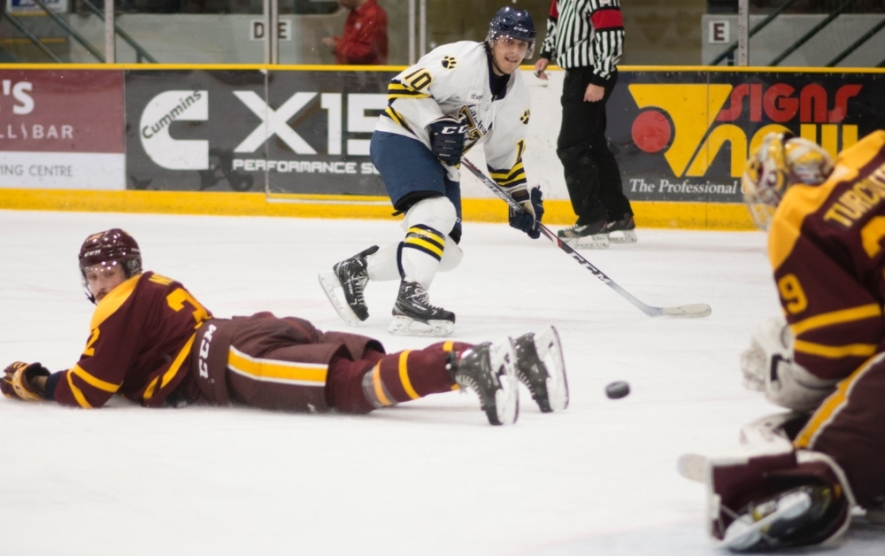 The Lakehead Thunderwolves men’s hockey team recorded their first home win of the year Friday night, scoring four goals to take the first of two games against the Concordia Stingers 4-3 at the Fort William Gardens.

After the Stingers took a 2-0 lead halfway through the first period, the Thunderwolves’ finally saw some success from a previously struggling power play.

Thunderwolves forward Jordan King scored his first goal of the game on the powerplay, assisted by Caleb Boman and Dexter Kuzcek.

A couple of minutes later, Tomas Soustal would record his first point of the night by scoring the Thunderwolves' second goal of the night and tying the game on another Lakehead power play.

The second period was quieter, as both goaltenders refused to let anything through until Concordia's Anthony Beauchamp shot one past Lakehead’s senior netminder Nic Renyard to reclaim the lead for the Stingers late in the period.

The final frame was all Thunderwolves. The Lakehead squad came out of the gate ready to earn the two points.

King scored his second power-play goal of the night to tie the game for the Thunderwolves, assisted by Soustal and Troy Williams.

Kuzcek sealed the deal for the Thunderwolves, scoring Lakehead’s game-winning goal on the power play with just under five minutes left to play in the third.

Renyard was solid all night for the Wolves, making 40 saves. On the other end of the ice Concordia’s goaltender, Marc-Antoine Turcotte made 37 saves.

The Thunderwolves will face off against the east division Stingers once more on Saturday night, the puck drop will be at 7:00 p.m. at the Fort William Gardens.