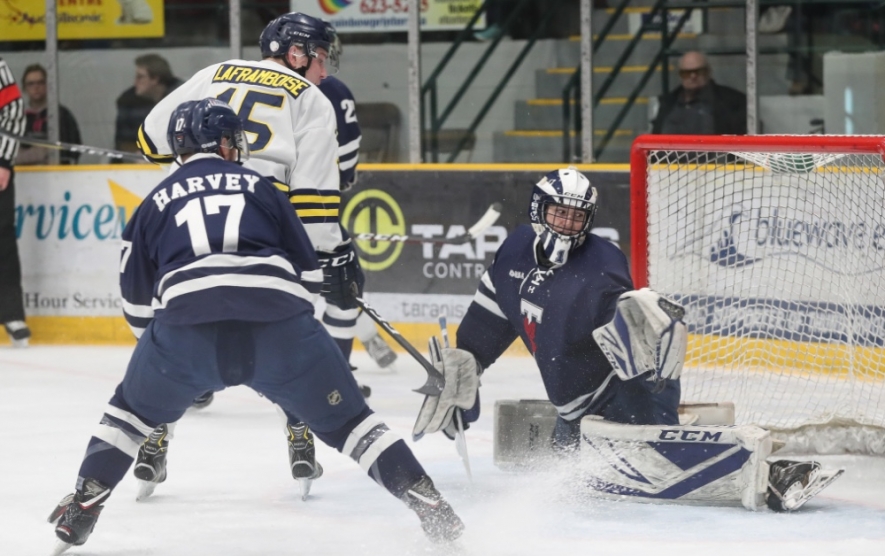 The Lakehead Thunderwolves were defeated 7-4 by the visiting Toronto Varsity Blues Friday night at the Fort William Gardens.

The goals came early for the Wolves as forward Dexter Kuczek buries one just 14 seconds in and just over a minute later Brett Wolframe extended the Thunderwolves lead with his first goal as a Thunderwolf.

Josh Laframboise put with Thunderwolves up 3-0 with a goal assisted by Jordan Larson and Daniel Del Paggio.

The second half of the first period was then dominated by the Toronto team as the scored a power play, even strength and short-handed goal.

The second period would see fewer goals from both teams, as Toronto forward Oliver Benwell scored the Varsity Blue’s second power-play goal to put them up 4-3.

Finding themselves trailing 6-4 late in the third, the Thunderwolves pulled goaltender Nic Renyard in an attempt to claw their way back into the game, but an empty-net goal for the Varsity Blues would seal the deal and give Toronto a 7-4 victory.

Thunderwolves goaltender Brock Aiken faced 19 shots before being replaced by Renyard, who faced 11. On the other side of the ice, Toronto goaltender Alex Bishop faced 38 shots.

The two teams will meet again for game two of the weekend series 7:00 pm Saturday, Oct. 26 at the Fort William Gardens.