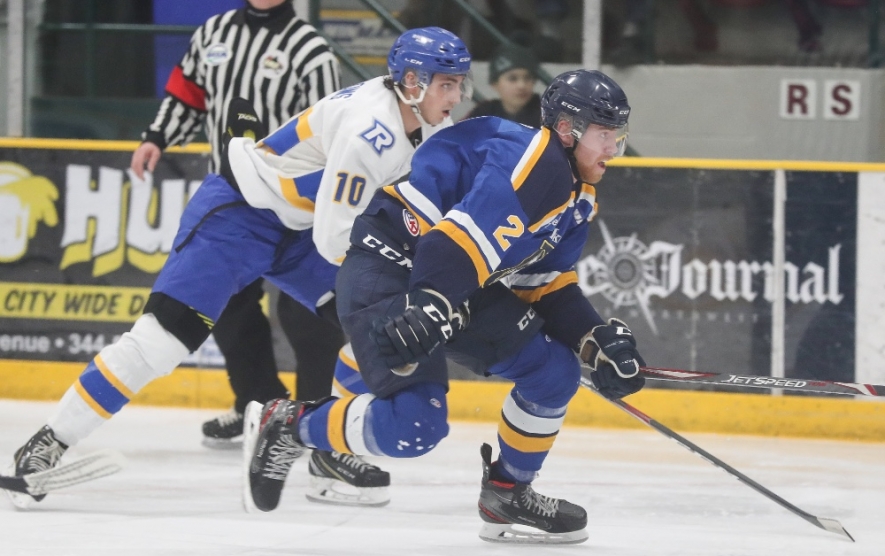 The Lakehead Thunderwolves were edge 4-1 by the Ryerson Rams in game one of the OUA West Quarter Finals at the Fort William Garden Wednesday, forcing the Thunderwolves into a must win situation.

The Rams took advantage of the power play and drew first blood when Patrick Fellows fired the puck past Thunderwolves goalie Brock Aiken.

The Rams kept pressure on the Thunderwolves, scoring their second goal of the night two minutes later. Adam Craievich tipped in a shot from Andrew Mullen to make it 2-0.

Jacob Kamps added to the Ryerson lead, squeaking the puck past Aiken and scoring his first goal as a Ram.

Ryerson netminder Garrett Forrest kept all the Thunderwolves shots out of the net in the the first period, but couldn’t keep them off the board in the second.

Tomas Soustal accepted a pass from Kyle Auger and slammed the puck into the back of the Ryerson net from the doorstep, giving the Thunderwolves their only goal of the game.

Aiken kept the Rams off the board in the second period, stopping all 13 shots.

Ryerson captain Matt Mistele sealed the deal for the Rams, scoring the final goal of the game in the third period.

Total shots on goal for the game were 44-30 for the Rams.

The Thunderwolves will head to Toronto for a do or die game two against the Ryerson Rams this Saturday, Feb. 15.