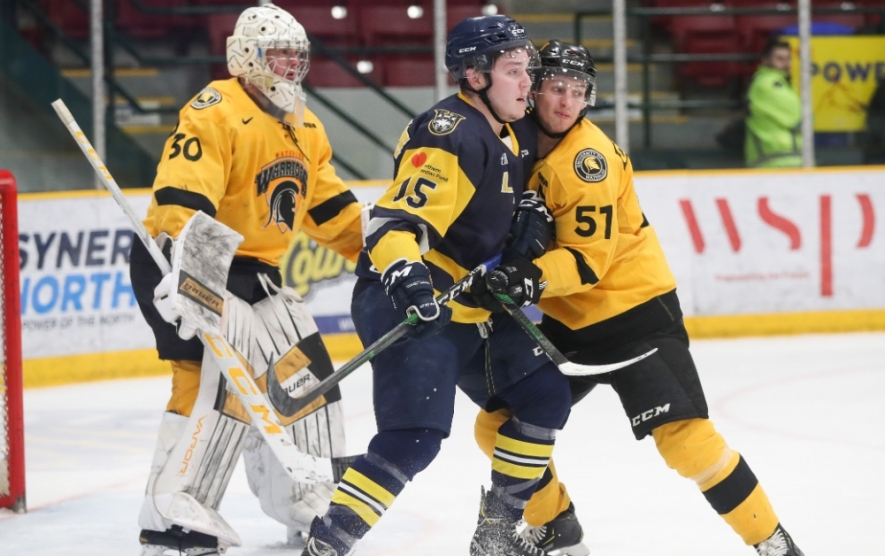 The Waterloo Warriors defeated the Lakehead Thunderwolves 4-3 in overtime, but it was the Lakehead squad that was celebrating.

Heading into Friday nights game, one point was Lakehead needed to clinch a playoff spot and the Thunderwolves were successful.

The Warriors were first on the board early in the first period thanks to Owen Burnell, who rang the puck off the goal post and into the back of the Thunderwolves net.

Lakehead’s Jordan King pounced on a rebound late in the first, taking advantage of a Thunderwolves power play to tie the game up.

After a mad scramble in front of the Waterloo net, Thunderwolves junior Daniel Del Paggio knocked the puck past the Warriors netminder, scoring the only second-period goal and giving Lakehead their only lead of the night.

The third period saw the Warriors retake the lead they had in the first thanks to goals from Jack Scanlan and Jacob Cascagnette.

With just over two minutes left to play, the Thunderwolves power play went to work and sophomore Josh Laframboise became the hero as he sent the game into overtime with his 17th goal of the season, ensuring the Thunderwolves would have a postseason for the first time since the 2017-18 season.

Markson Bechtold scored 57 seconds into overtime, ending the game and earning the win for Waterloo.

The Thunderwolves and Warriors will face off one more time on Saturday, Feb. 8th at Fort William Gardens for their final game of the OUA regular season.