Thunderwolves edged by Guelph in OT 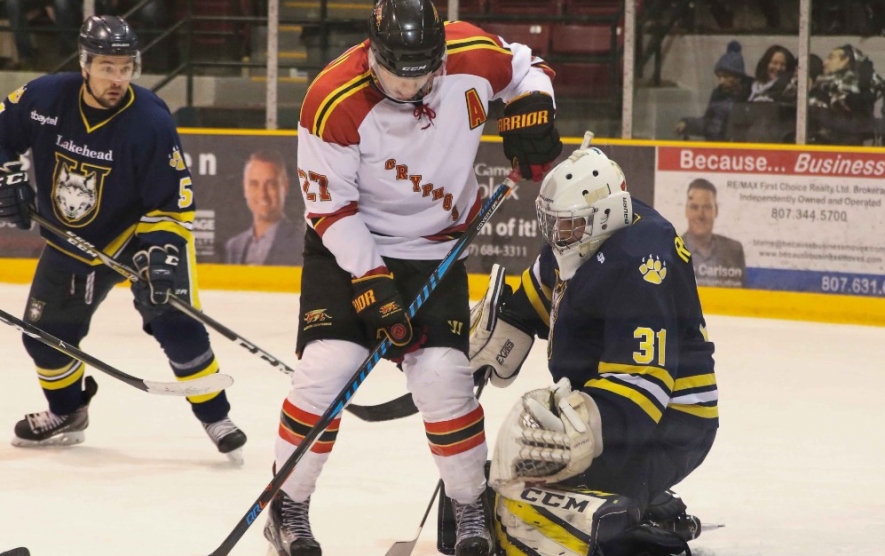 The Lakehead Thunderwolves let a two-goal lead slip away and were edged 3-2 in overtime by the Guelph Gryphons in front of 1,836 fans at the Fort William Gardens on Thursday night.

In a way, it was a tale of two contests as Lakehead controlled the play for the first half of the game, while Guelph dominated the last half.

Matt Alexander put the Wolves up 1-0 when he finished off a 3-on-2 with a shot that beat Guelph goalie Andrew Masters low on the glove side at 12:01 of the first period, with the helpers going to Dylan Butler and Scott Gall.

That was the only goal of the opening period in which Lakehead outshot Guelph 15-8.

Both teams had good scoring chances in the middle frame, and although the Gryphons began to apply more pressure in the Lakehead zone, they were unable to put anything past Wolves’ goalie Nic Renyard who was very sharp, as was his counterpart at the other end of the ice.

Late in the second period, Thunderwolves’ defenceman Tyler Anton made two heroic shot blocks in a row, and soon thereafter Brennen Dubchak sped down the right side and rifled a slap shot past Masters to put Lakehead up 2-0 heading into the third.  Anton and Renyard were credited with the assists.

Penalty trouble cost the Thunderwolves early in the third period when Guelph’s Seth Swenson scored on a one-timer at the 3:50 mark while the Gryphons held the man-advantage.

Marc Stevens knocked home a rebound to knot the score at 2-2 on another Gryphons’ power play at 7:10.

The overtime session was short-lived as Todd Winder held onto the puck on a 2-on-1 break and fired the rubber past Renyard just 46 seconds into it to give the Gryphons the come-from-behind win.

In a penalty-filled affair, Lakehead went 0-for-7 on the power play, while Guelph was 2-for-8.

Total shots on goal for the night were 43-40 in favor of the Thunderwolves.

The Wolves and Gryphons will face-off again tomorrow night beginning at 7:00 PM.