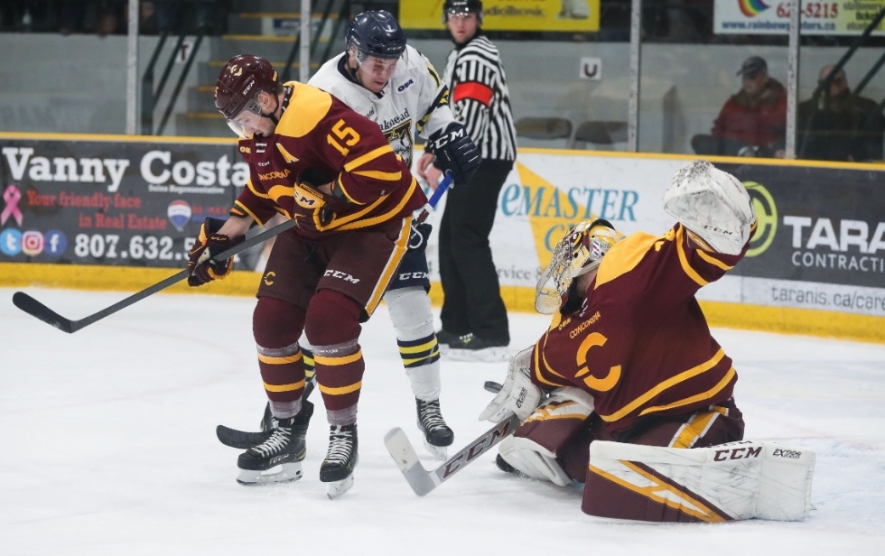 The Lakehead Thunderwolves defeated the Concordia Stingers 5-4 in overtime to collect all four points Saturday night at the Fort William Gardens.

The Stingers were first on the board after Colin Grannary went five-hole on Thunderwolves goaltender Nic Renyard.

Less than two minutes after Laframboise’s goal, the Stingers took back the lead and the Thunderwolves finished the first period down by one.

Not long after, the Thunderwolves were given their first power-play opportunity of the night and freshman defenceman Kyle Auger made sure to capitalize with a one-timer from the blue line, giving Lakehead their first lead of the night.

The Thunderwolves held the lead for most of the third period until Concordia’s Chase Harwell buried a rebound with just over five minutes to go to tie the game and force overtime.

Lakehead started and finished overtime with Tomas Soustal, Del Paggio and Auger on the ice.

After a collision in front of Concordia’s net opened up the ice, Auger walked in and scored his second goal of the game to give the Thunderwolves back-back wins at home.

The Thunderwolves will be on the road for three games next weekend as they face the Waterloo Warriors on Thursday and the Ryerson Rams Friday and Saturday.