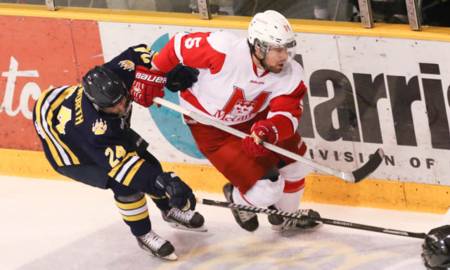 The Lakehead Thunderwolves were downed 5-1 by the McGill Redmen at McConnell Arena in Montreal onFriday night.

McGills David Rose opened the scoring while the Redmen were on the power play at 3:13 of the first period.

Mathieu Pompei put McGill up 2-0 at 12:49, and then struck again at 19:54 when he finished off a nice two-on-one that Wolves goalie Devin Green had no chance on.

Rose notched his second of the night just 3:27 into the middle frame to give the Redmen a 4-0 cushion.

Lakehead broke Jacob Gervais-Chouinards shutout bid at 17:26 of the second when Jake Wright finished off a nice tic-tac-toe play with Linden Springer and Carson Dubchak to cut McGillslead to 4-1 heading into the third.

The Redmen put the game away on Dominic Talbot-Tassis power play goal with just over four minutes remaining in the game.

For the night, McGill went 2 for 6 with the man-advantage while Lakehead was 0 for 8.

Shots on goal in the game favored the Redmen by a 36-28 margin.

The Wolves will look to rebound when the two teams square off again tomorrow at 5:00 p.m.