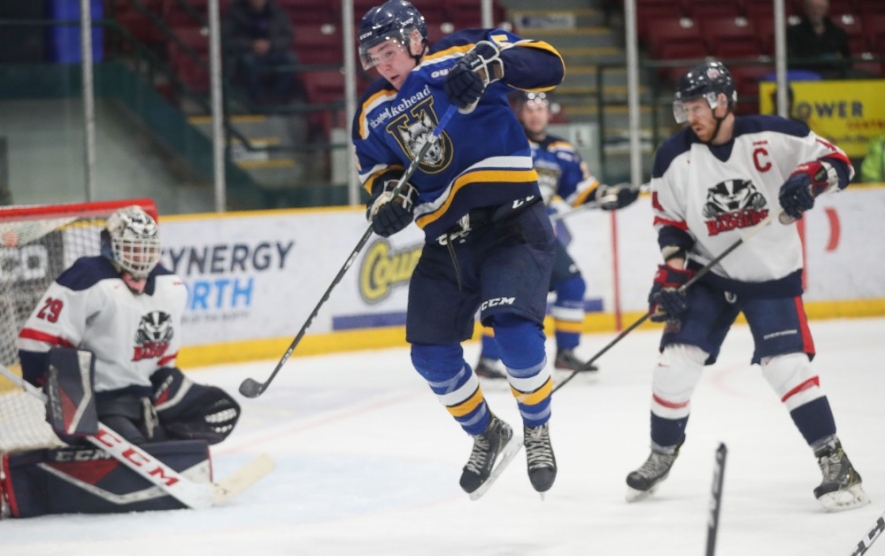 Spurred on by a three-goal performance by Josh Laframboise, the Lakehead Thunderwolves rallied from a two-goal deficit to defeat the Brock Badgers 5-3 before 1,684 fans at the Fort William Gardens on Saturday night.

Jared Marino’s short-hander at 1:45 of the first followed a Frank Pucci marker at 7:45 staked the Badgers to an early lead, but Lakehead’s Tomas Soustal narrowed the gap to 2-1 when he finished off an odd man rush set up by Daniel Del Paggio and Jordan King at 11:23.

Laframboise converted a cross-crease pass from Jordan Larson on a Lakehead power play at the 19:56 mark, with Soustal getting the second assist.  That score not only narrowed the gap to 3-2, but gave the Wolves a big boost heading into the second.

After the offensive outburst in the opening 20 minutes, things settled down in the middle stanza as Aiken steadied the ship and kept the Badgers off the board for the rest of the night.

Lakehead owned the final frame and took advantage of another power play opportunity when Laframboise batted Troy Williams’ rebound out of the air and past Brock goalie Mario Cavaliere to even the score at 12:54 of the third, with Soustal adding another helper.

Freshman Geoff Dempster got the winner when he knocked home a rebound on an odd-man rush with just 39 ticks left on the clock, with Jordan King and Callum Fryer assisting.

Laframboise completed his hat trick 19 seconds later with an empty-netter after Del Paggio sprung him loose up the middle.

For the night, the Thunderwolves were 2-for-5 with the man-advantage while the Badgers went 0-for-3.

Total shots on goal in the contest were 38-26 for Brock.

The win puts Lakehead’s OUA record at 12-12-2 and in 8th place in the West Division.

The Thunderwolves will host Waterloo next weekend for the final two games of the regular season and will need to collect just one point to clinch a playoff berth.